A Little Grit in the Machine 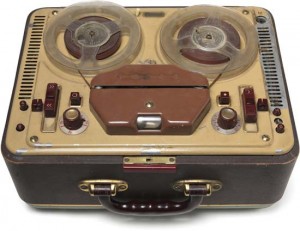 It wasn’t that long ago that music tracks were recorded to analog tape. Although that method has been superseded by recording to hard disks for most recordings, many engineers still use analog equipment when tracking and mixing. Why continue to use analog equipment when digital is so much more convenient? Simply put, analog devices color sound in ways that we like. Analog transforms the recording signal by saturating and distorting the sound in pleasing ways. Digital recording technology doesn’t impart the same kind of sonic footprint. It captures it in a colorless way. But we like color. We like the imperfections that shade what we are hearing.

Fortunately, for those of us who don’t have access to a vintage Neve console and a wide array of classic gear, there are many plugins that can approximate this in the digital realm. We have plugins that saturate, distort, com- press and amplify our signal paths in an attempt to recapture the magic of analog audio, many of which may be included with your DAW. Analog emulators can bring a bit of grit, grime and dirt to sounds that otherwise sound too pristine. Guitars, keyboards, synths, drums and even vocals often benefit from a bit of analog smear and using these plugins can degrade the sound in ways that give them character, allowing them to exist more harmoniously in the mix and create a more organic sound. Strange as it may seem, to get a better overall sound it is sometimes necessary to make the sounds more low fidelity.

Many times when I load up a virtual instrument I find there is something too perfect about it. It may be beautifully sampled but it sounds too clean, too flawless. When I attempt to put it next to an electric guitar (a grungy instrument if there ever was one) in an arrangement, it doesn’t sit well because the virtual instrument lacks the flaws and imperfections inherent in the guitar. That is where distortion comes in. I love distortion. I love the big, in your face, brain-melting distortion that you hear on hard edged tracks, but more often I use it in a subtle way. I will add a plugin on the channel strip that allows me to futz up the sound ever so slightly. You wouldn’t describe it as being distorted, in fact, you might not even notice the distortion unless you listened very closely because I’m not trying to make the part sound distorted. I’m simply trying to give it a little edge and add some harmonic excitement.

There are many plugins that can be used to add distortion. Some have the word “distortion” in the name but they may use words like “saturation,” “overdrive” or “lo- fi.” Generally, they are found in the harmonic section of your DAW’s plugins because they add harmonic content to the sound. Your DAW probably has some good built-in distortion effects available to you. For example, Logic has a whole section of distortion plugins. For subtle effects, I prefer ones that emulate analog distortion such as Distortion II over the extreme digital destruction of Bitcrusher. And a little goes a long way. I will often add just enough that the sound is warmed up but not so much that the distortion calls attention to itself.

Another way to add a bit of grit is to run a sound through an amp simulator. You may have done this with a guitar or bass but virtual amps sound great on keyboards, percussion, and drums. Even vocals can sound cool run- ning through an amp. Most of the DAWs now come with amp simulators and there are plenty of good third party plugins, such as Native Instrument’s Guitar Rig and IK Multimedia’s Amplitube. A little knowledge of what different types of amps sound like is helpful. Typically the plugin amp’s interface will closely resemble the type of amp it is supposed to sound like and a Google search on “guitar amplifier” can give you an idea of what the real amp is. Unsure of what those amps sound like? Take a look at what guitar players use them and then give a listen to their sound. You will soon discover that an amplifier like a Marshall is well suited for harder edged sounds, whereas Fenders tend to give a cleaner less distorted tone. Amplifier plugins also may include guitar stompbox emulators that can modulate, delay, filter, compress and further mangle the sound in ways that are gloriously lo fi. If you want just a little bit of the amp or stompbox effect in the sound, try loading it on an aux channel and using a send on your channel strip so you can easily blend in as much of the amplified sound as you wish.

Creative use of compression can also add character to otherwise lifeless sounds. Although compressors are primarily used to tame the amplitude envelope of an instrument they can also be used to impart some analog warmth. Mixers sometimes run sounds through analog compressors without compressing the signal, simply to add the compressor’s character to the sound. This approach can be used with compressor plugins that emulate classic analog compressors. For example, Logic’s new compressor has buttons at the top of the interface which allow you to apply models of compressors with tube, optical, VCA and FET circuitry. These models all have different sonic characteristics that will change the timbre of the sound in subtle ways, in addition to compressing the signal. There are good articles on the Internet which explain the differences between the compressor types and what kinds of instruments they tend to be used on. Filters are used to limit the frequency range of sound. Equalizers typically have high-pass and low-pass filters built into them, but when I want to give a sound more character I prefer to use filters that function like those found on synthesizers. Synth filters have an additional parameter that is not generally found on EQ filters— resonance. Resonance emphasizes the frequency at the filter’s cutoff point. Adding resonance gives some nice harmonic emphasis to a sound while the filter helps to carve out its own frequency space within a mix. This works great with low-pass filters, but band-pass and high-pass filters can also yield interesting results. You will find that different manufacturers’ filters have their own unique qualities and characteristics to them, some sounding more analog than others. One of my favorites is FilterFreak by SoundToys, which is incredibly flexible and sounds fantastic.

Reverb can also be used to add some dirt to the sound. I particularly like using convolution reverbs like Audioease’s Altiverb and Logic’s Space De- signer for this purpose. Rather than load an impulse response of a beautiful sounding space, I will run a keyboard or sample of a mellotron through an IR of a dusty plate reverb or a spring reverb of the type found in old guitar amps. These typically have some grittiness to them and add a lot of character to the sound being reverberated. Altiverb even has a whole section of odd spaces such as dustbins, cheap toys and nuclear cooling towers that can be used as echo chambers for your sounds. It is even possible to load wave files of any sound into convolution reverbs to use as resonators. The results are often interesting, but turn down your outputs when testing these out as the levels can be unpredictable.

Adding imperfections to tracks with distortion, filters, amps, compressors and funky reverbs can add a lot of life to the sound. Virtual instruments and sounds we track in digital studios can sound boring if you don’t inject some anomalies into the channel strip. The thing we love about analog is the coloration and smear that analog technology imparts on sound. You can use plugins that simulate the effect of analog gear as tools to color and shade your mixes. Fortunately, with clever approximations of analog techniques and a good ear you can inject a lot of that character into your arrangements to create a more organic sound.